The frontlines of austerity

Since 2010, the Conservative government has dramatically reduced funding to public services, prompting local councils across the UK to call for an ‘end to austerity.’

Librarians and libraries have increasingly filled the gap in public services, from help with benefits claims, to support for survivors of domestic violence, to providing food banks, and more.

250m visits are made to public libraries in England each year – compared to 171m cinema visits, or just 47m visits to government-funded museums.

Lewisham, in South East London, is a battleground for these issues. The borough has the highest proportion of children, young people and older people in economic deprivation in England. Over the next 20 years, Lewisham is expected to see the second fastest rate of growth in inner London.

The motto of the borough is Salus Populi Suprema Lex: ‘The welfare of the people is the first great law.’

In a community-run library in Lewisham, Kathy Dunbar is about to take her first bathroom break. It’s past lunchtime, but she’s been too busy to stop until now.

Kathy has co-managed the New Cross Learning centre alongside friend Gill Hart since 2011, when Lewisham Council announced that it was axing five libraries following a round of budget cuts. Kathy and Gill got the keys to New Cross Road library, which had been tipped to become a pound shop.

“We’re a library for all the community, and we try and make it feel like a safe place to come. It’s for all, really,” said Kathy.

Kathy and Gill each often volunteer 60 hours per week. They nightlight as caretakers, renting the space out to make enough money to keep the doors open.

Kathy’s noticed a change in the demographic of people coming in more recently, making their work more demanding. She feels they would benefit from more training.

“And then there’s the abuse. Gill and I work quite well – we know what to do, we make sure we’re behind the desk. I usually put a chair in front of me.” Kathy Dunbar

In early October, a further £450k library budget cut was announced, containing two options for the council: either reduce staffed library hours by almost half in 3 of the remaining council-run libraries, or remove all library staff from 2 of them.

Kathy is concerned that community libraries will be overwhelmed if a proposal to reduce the remaining council-run services goes forward. “People could come in at any time and need urgent help,” she said. New Cross Learning houses a food bank, provides free sanitary products, and most often, a safe and warm space with people to talk to. 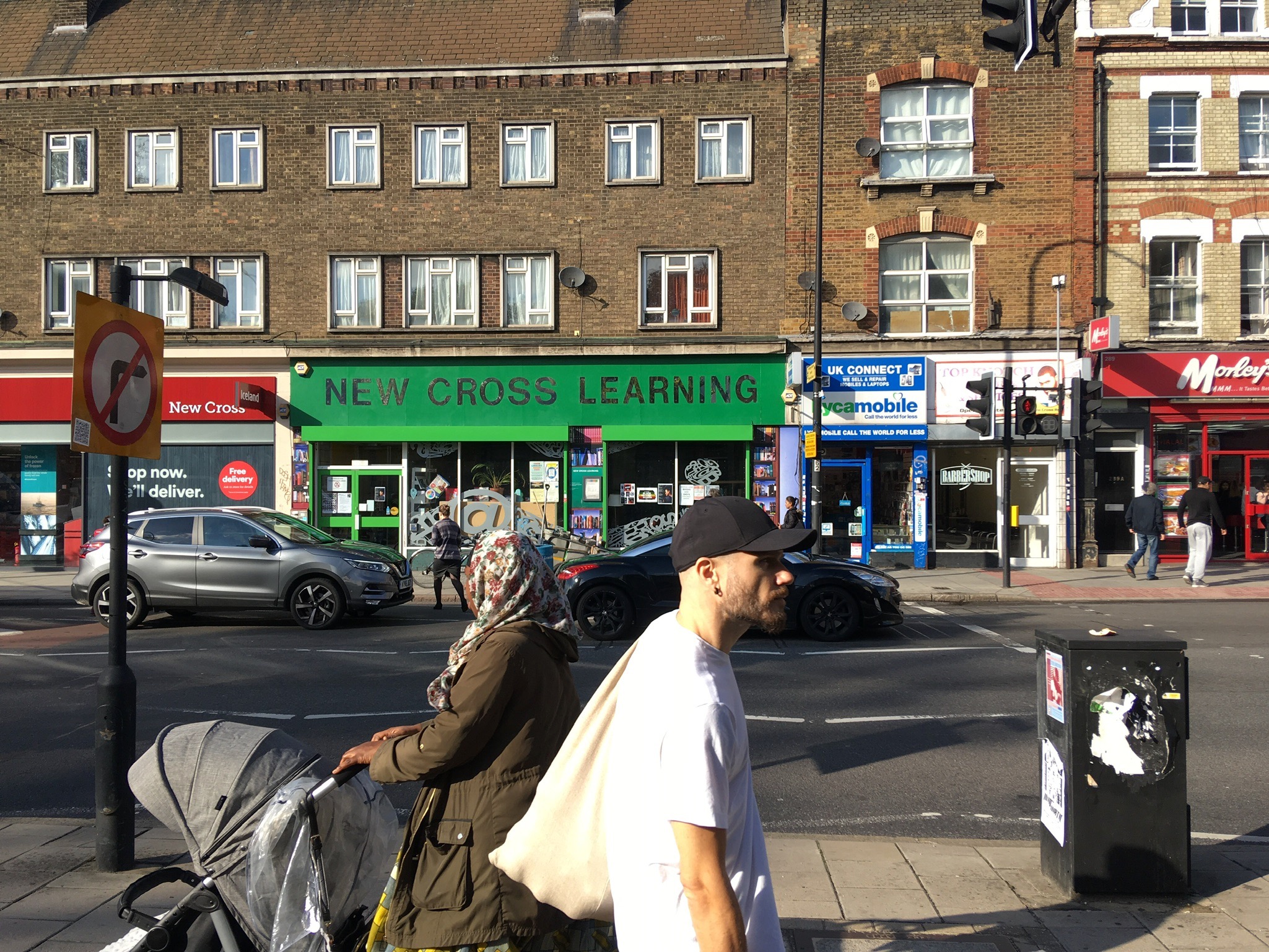 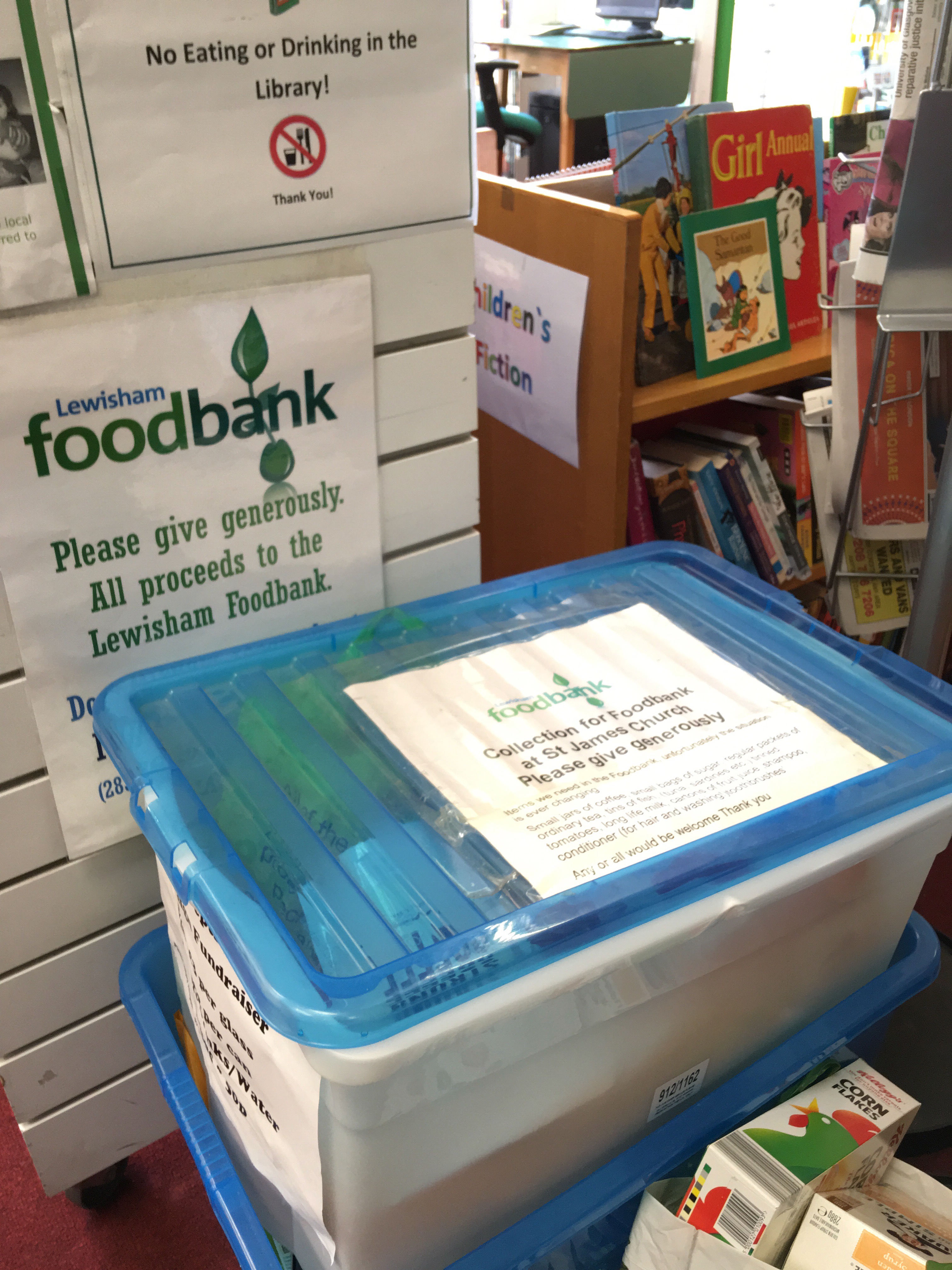 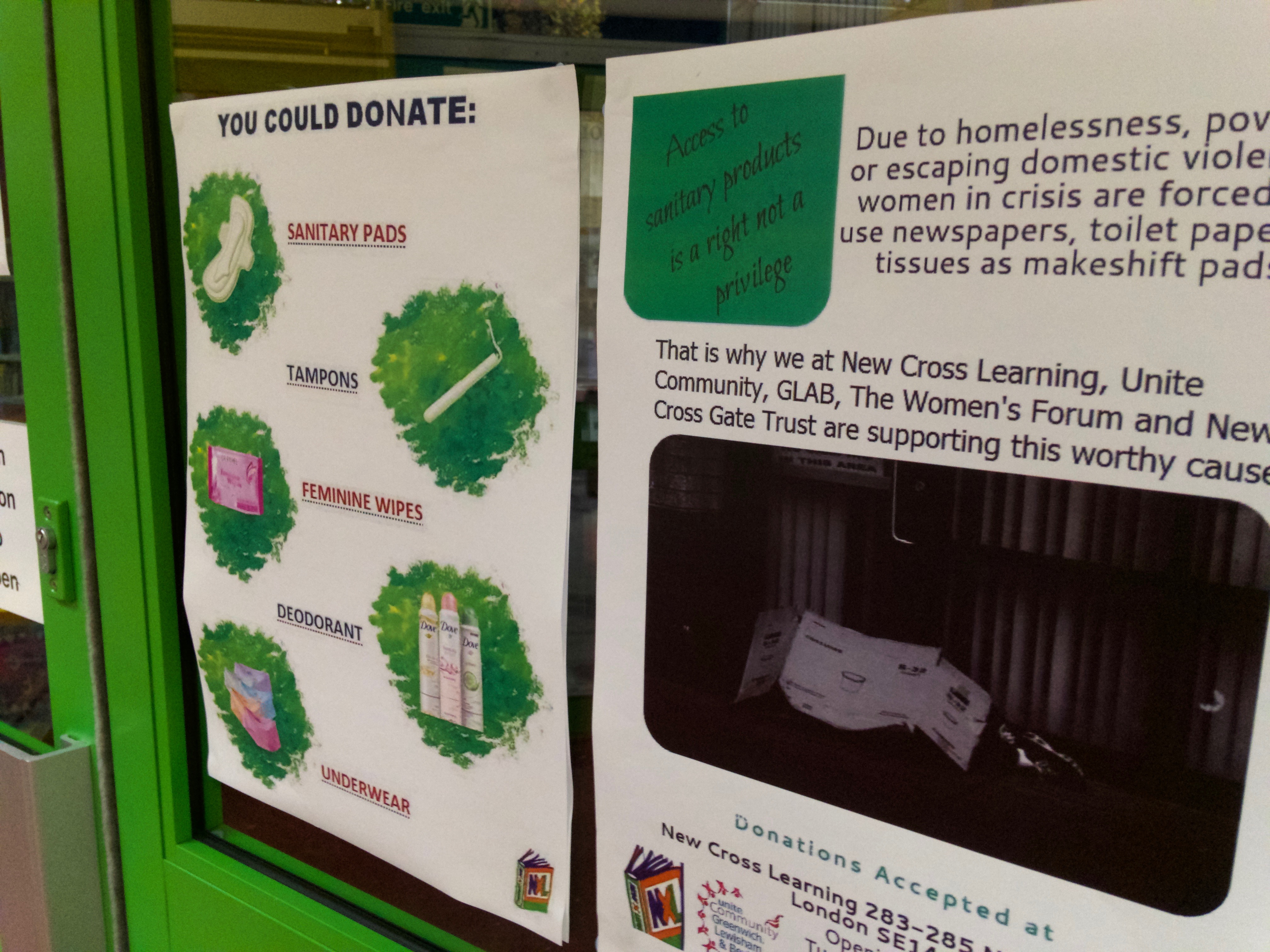 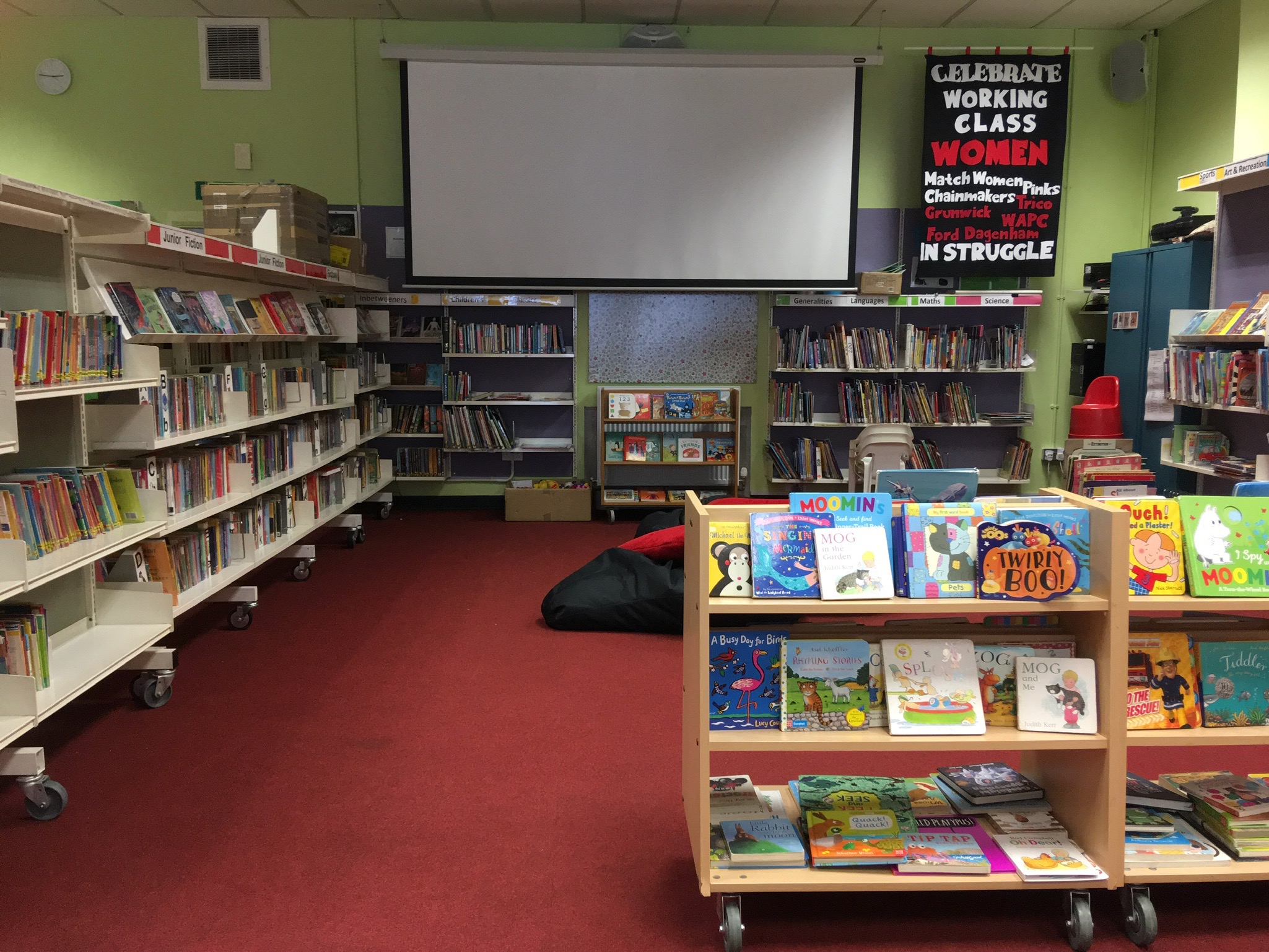 Jonathan Slater, Cabinet Member for the Community Sector, said the council was facing difficulties of its own.

The Conservative Government has cut Lewisham’s funding by more than half since 2010, and they are being forced to find a further £30m in cuts by 2021. So far, they have only found £21m.

“We are proposing to reduce the Library and Information Service’s budget by £450k to help us with the further cuts we face,” said Slater. This figure represents less than 1/5 (14%) of the current budget allocated for libraries.

“None of the proposals include any library closures, or even reduced hours, and every effort would be made to lessen the impact on our service users. However, it will mean that the hours the libraries are staffed would be reduced.”

Lewisham councillors will vote on whether the proposal should go forward on November 5.

Dr Alice Corble had just completed a PhD examining the negative impact of cuts to UK public library services. She was looking forward to ‘Libraries Week’, a celebration of the nation’s libraries, when she was alerted to the Lewisham cuts by another campaigner on Twitter.

#LibrariesWeek is dominated for me by news that in my home borough of #Lewisham huge cuts of £450k proposed to the already decimated @LewishamLibs, further depriving two of the most deprived wards in the country from access to vital services. https://t.co/KALdBaXPhc

Alice sprang into action, and soon the ‘Save Lewisham Libraries’ campaign had been reignited.

Like Alice, many of the campaigners had been active in previous attempts to protect Lewisham’s libraries, including occupying an axed library overnight in 2011, or joining a 2016 protest which saw hundreds marching through the borough.

“Lewisham borough has one of the youngest and fastest-growing populations in London. Reducing what’s left of the already decimated library service is a crime against the next generation,” she said.

Fifty-odd people had gathered in the British Library car park on November 3 for a national ‘Save the Arts and Libraries’ march.

Laura Swaffield, the Chair of the Libraries campaign, had hoped more people would turn up.

“I’m feeling pessimistic but determined. It seems to me there’s absolutely nothing one can do that will make people listen,” she said. Laura Swaffield

Her local library in Lambeth, London, had recently become a self-service library, a fate which could befall two of the remaining Lewisham council-run libraries.“The difference is just stunning,” she said. “The self-service libraries are barely used – it’s bleak.”

Laura raised concerns about child safety in self-service libraries, which have led some to ban children completely, as well the issue of endemic loneliness. The UK Government has become the first in the world to appoint a Minister for Loneliness, and Prime Minister Theresa May launched the Government’s first strategy to combat it in October.

“At the same time, they’ve closed 737 libraries,” said Laura. “That used to be a local place you could wander into, you don’t have to buy a cup of coffee, you can just sit there with people around you if that makes you feel less lonely.”

Her voice was drowned out by chants of: “If our libraries are under attack – what do we do? – we fight back!” 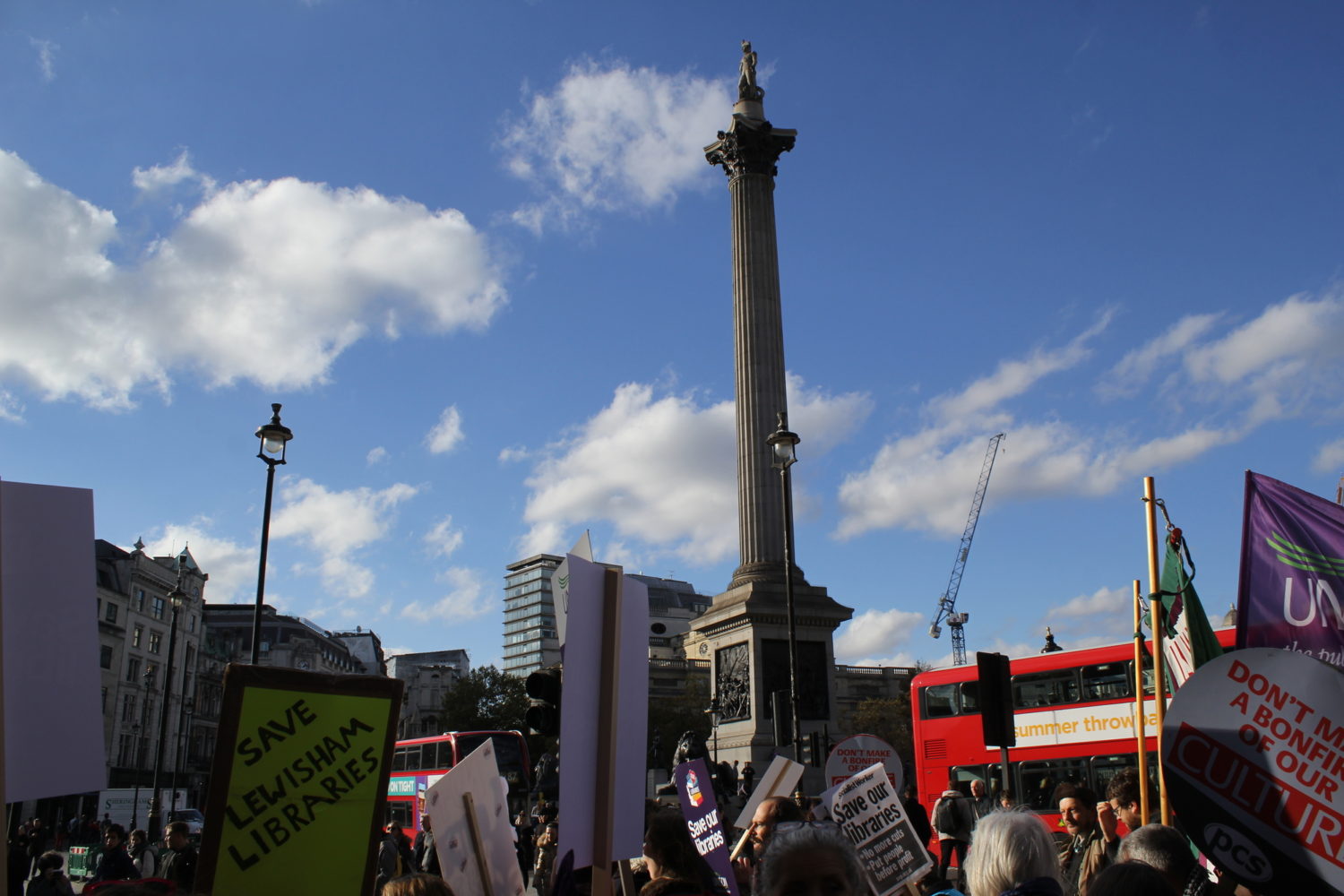 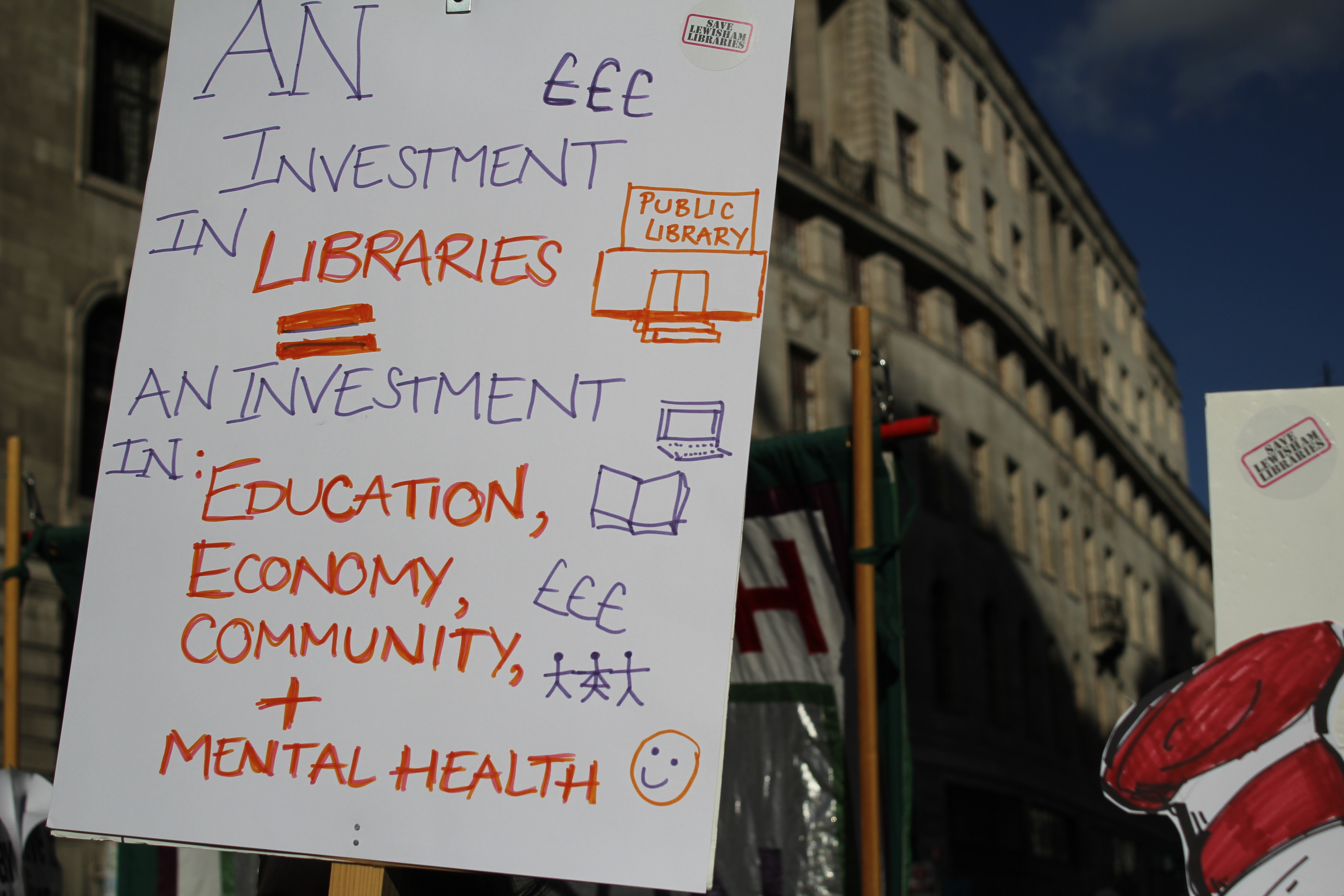 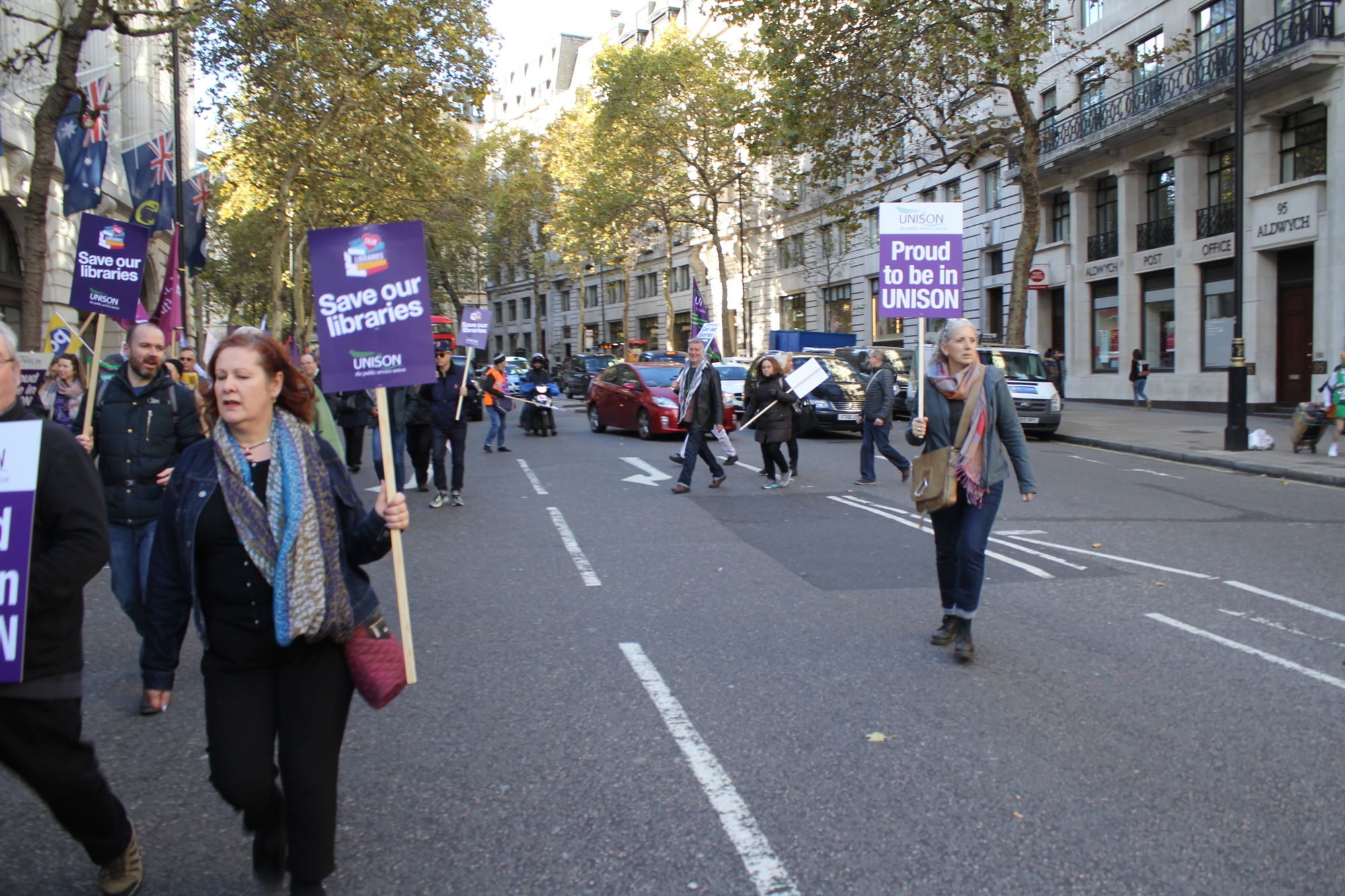 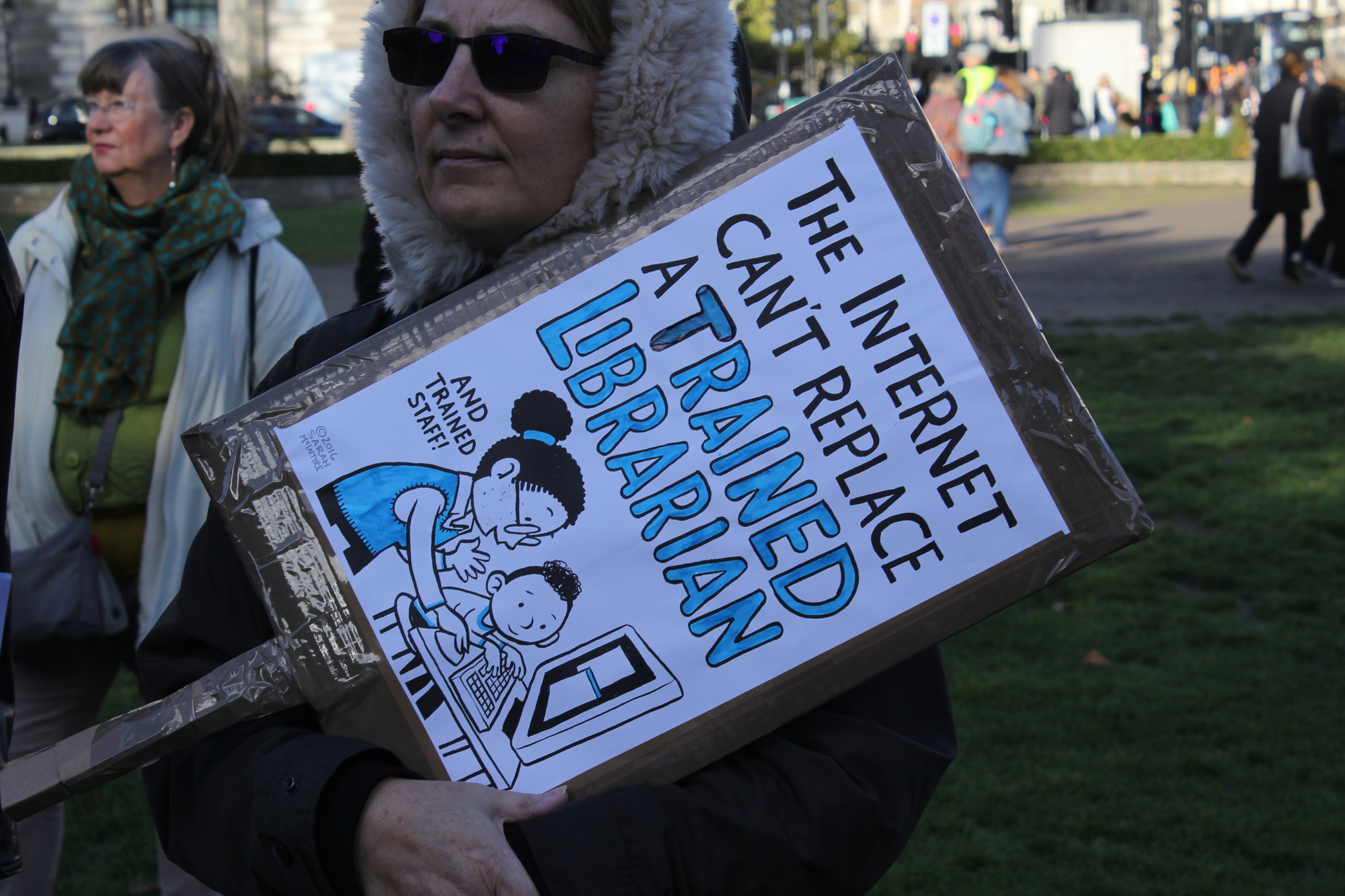 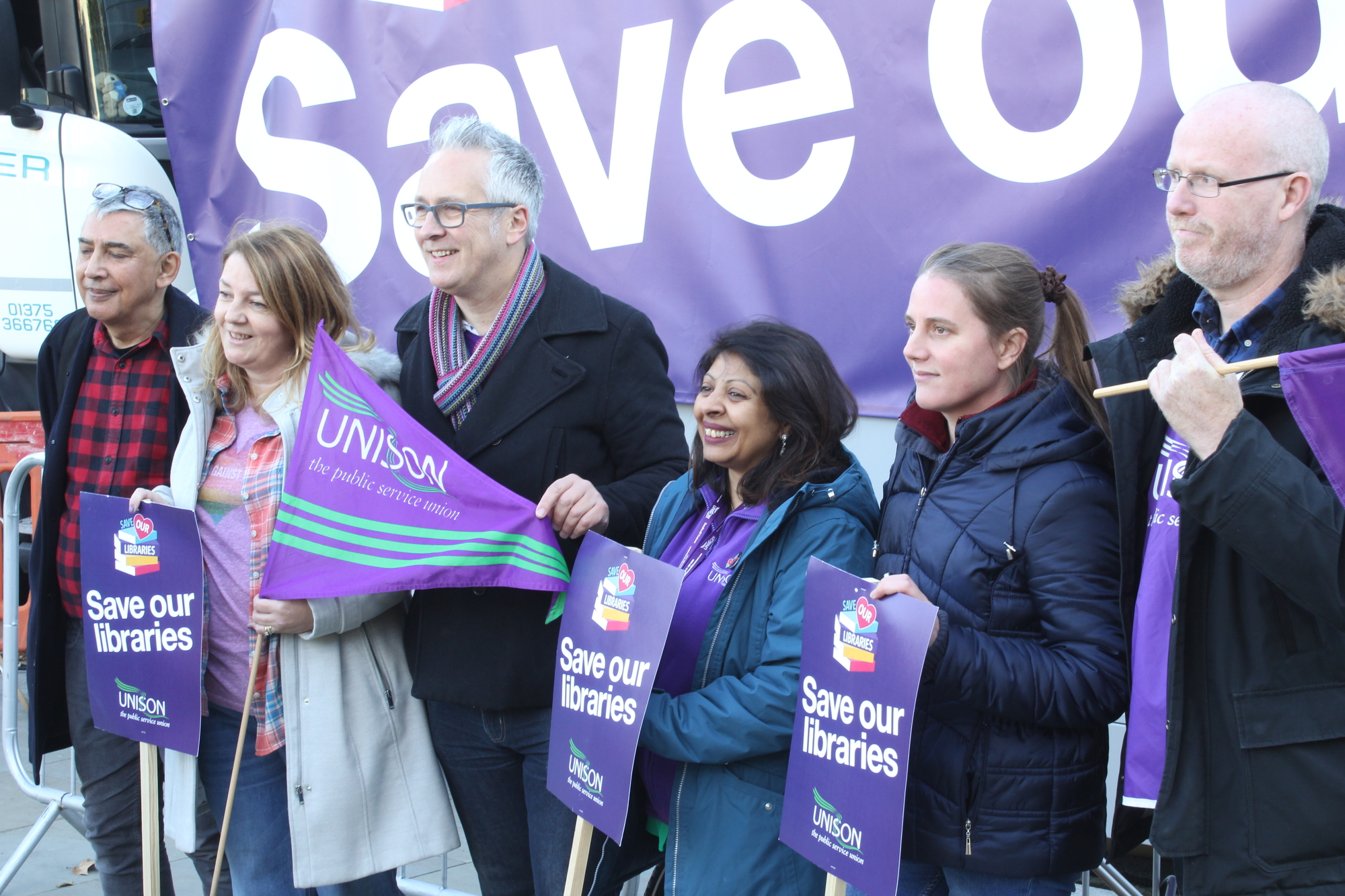 The ‘Save the Libraries’ march finished with a rally in Parliament square, in the shadow of the building where British law is made – and contested.

“It shall be the duty of every library authority to provide a comprehensive and efficient library service for all persons desiring to make use thereof.” – Public Libraries and Museums Act, 1964 (section 7)

Alan Wylie, librarian and campaigner, said: “Councils have to provide libraries by law. They’re not just a luxury or an add on.”

Alan has been fighting to stop library cuts since 2010, which he described as the beginning of a national crisis. “Some councils are pushing it to the point where they’re saying that one library for the whole area of a council is ‘comprehensive and efficient,’” he said. “Until someone takes them to court.”

There have been many legal challenges to library cuts in the UK since 2010, some resulting in wins for councils, others in wins for campaigners.

During the public consultation on November 5, Lewisham campaigner Caroline Jupp told councillors: “We believe that the proposed cuts will have a profoundly negative effect on vulnerable user groups and contribute to a rise in anti-social behaviour.”

She said the areas that would be affected by the cuts were highly populated with ‘protected characteristics’ under the Equalities Act, including age, disability, race, religion and gender.

In their own words, Lewisham’s residents talk about what libraries mean to them:

“When I was much, much, younger I remember I would really annoy my mum and dad to take me to the library and take out stacks and stacks of comics at a time. I would know my library staff, it was like a community, there were a couple who were almost like, well I don’t want to say a second family, but mentors.” Adam Abdullah, 15, Young Mayor of Lewisham

“I have 2 kids, they use the libraries to read, and to take out books. And also, libraries are public spaces that people can use, they’re meeting spots for people, for the community to meet. Libraries are crucial.” David Toribo

Saffron Blue loved to read as a child. Her family were neither rich nor poor, but education wasn’t a priority in her household. She wrote a poem in reaction to the proposed library cuts:

It was at the library

That I found my own space

To face another day

It was in a book

That I learnt to look another way

The library opens the door

To many other worlds

For middle-class and poor

For every boy or girl

We need our dreams

We are not mainstream 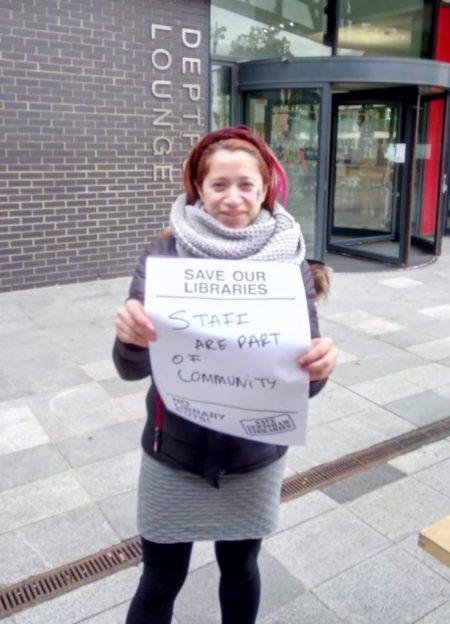 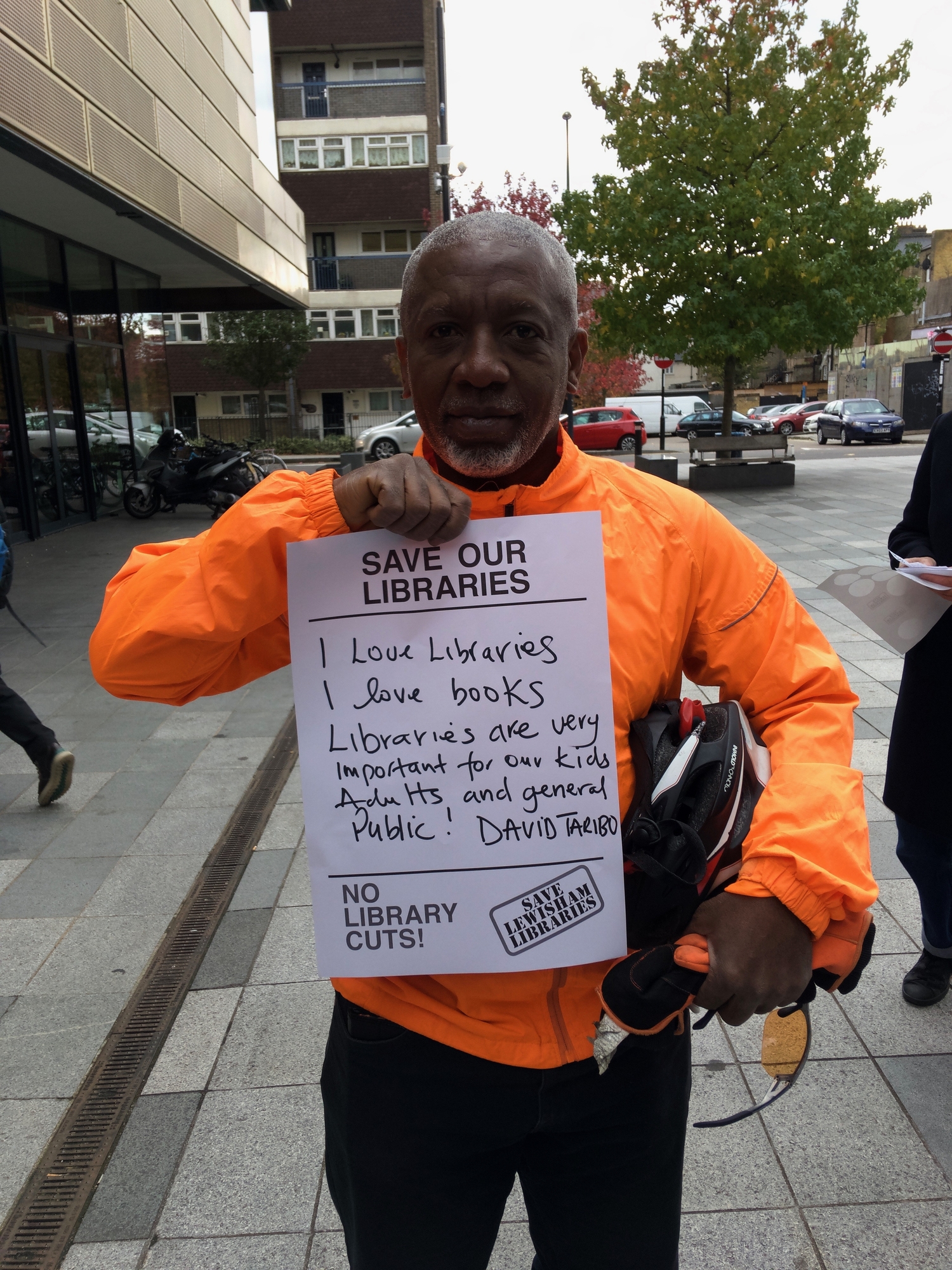 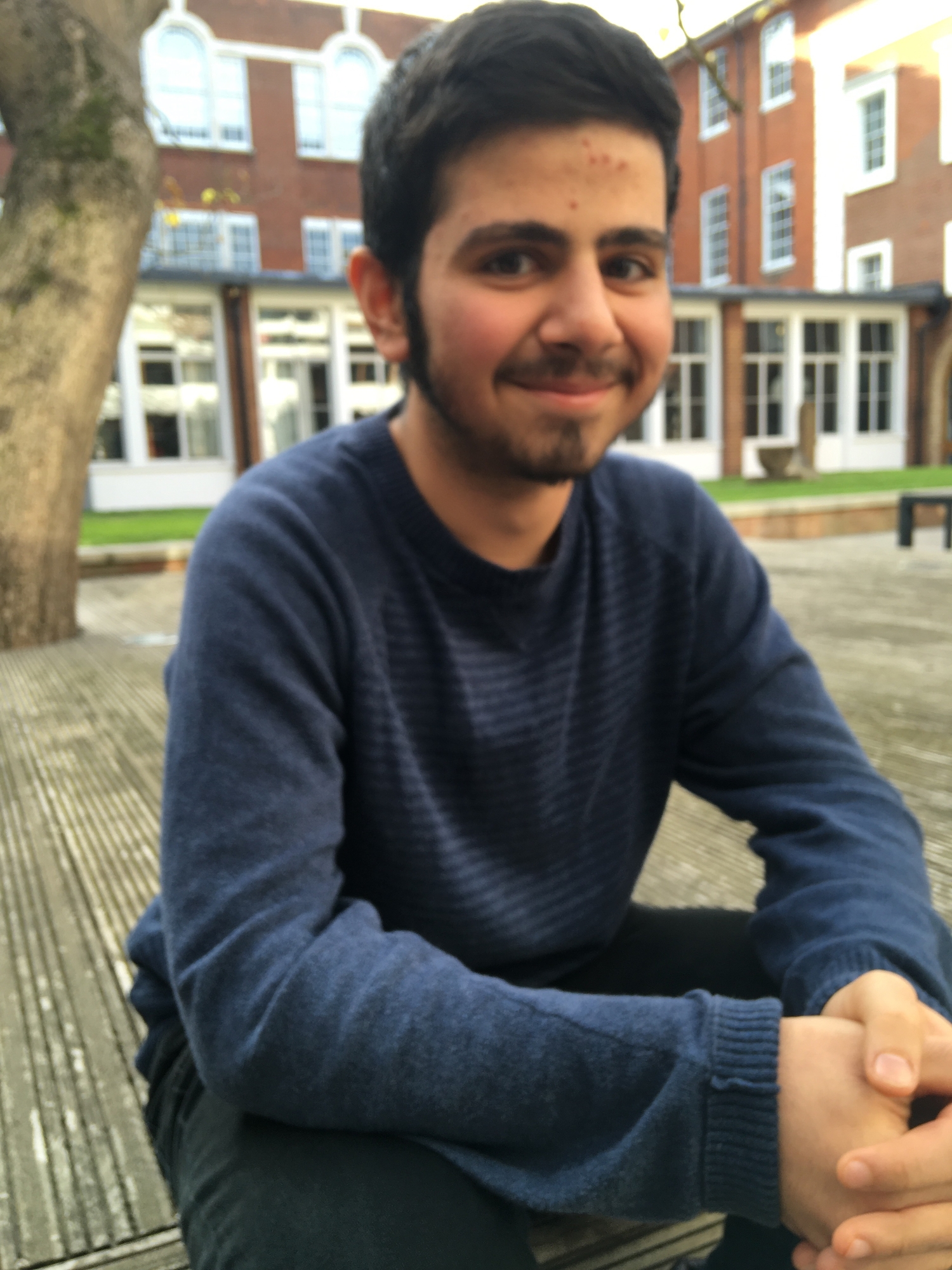 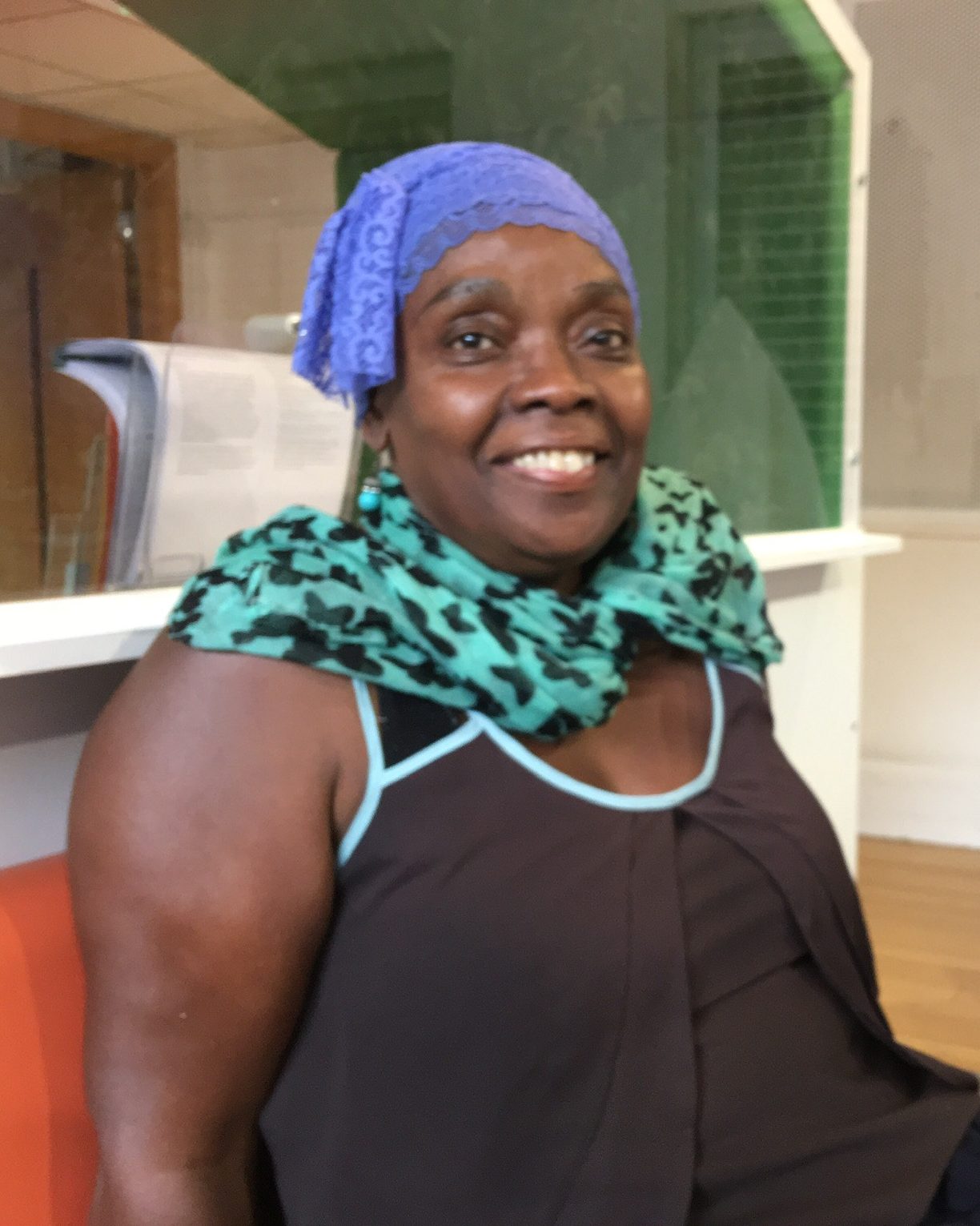 Enough Lewisham councillors agreed with the campaigners, and the proposal will be referred on to Mayor and Cabinet  The campaigners will come up against them again in late November, but an acknowledgment from the council of the damaging impact of the cuts is a small victory.